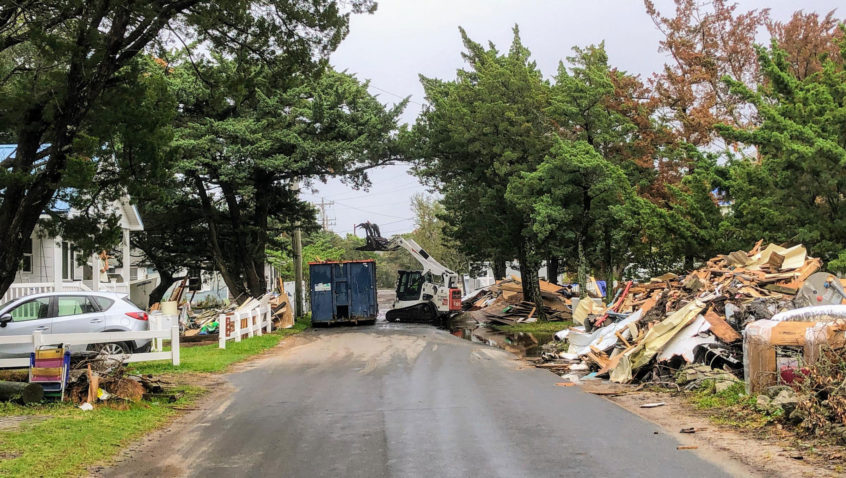 In early September 2019, Hurricane Dorian hit the East Coast of the United States. Gratefully, the hurricane missed our friends at One Harbor Church, in Morehead City. However it struck their neighbors in Ocracoke with devastating effect. Having recently launched a local recovery effort in their own town after Hurricane Florence, the One Harbor team sent volunteers to Ocracoke to assist the residents in the immediate aftermath of the storm. Kristin Cook, disaster relief coordinator at One Harbor Church wrote us a brief report on their experience.

The morning after landfall, as Hurricane Dorian was winding down, Donnie Griggs, Travis and Becky Evans and I got ready to conquer whatever the storm had left with our little town to deal with. We drove around town to assess the damage for ourselves. There were a few trees down, a few flooded roadways and no electricity. However compared to our experience after Florence it seemed as if we had been spared the worst of Dorian’s wrath.

Donnie and I began to drive farther Down East to the most remote islands of our county to see if we could be of help further afield. The roadway to this little sea town, Cedar Island, was still covered in water, marsh grass and water moccasins.

Donnie and I drove carefully behind the National Guard, the Sheriff and various county officials to see if our neighbors had fared alright. When we arrived and the county officials had come and gone, the Cedar Islanders told us of the devastation of their neighbor to the north, Ocracoke.

Ocracoke had seen the worst of Dorain. We heard stories of people whose homes had seen water 7-9 feet above ground level, people who had to swim to safety during the height of the storm, of a community who had lost everything.

The Cedar Islanders gave us a list of immediate needs (food, toiletries, diapers, etc.) and Donnie and I were off. I began working out the logistics and Donnie rallied the community to support our little mission. The next morning we were one our way with thousands of dollars of items purchased with donated money in the last 10 hours.

We loaded up a small fleet of crab boats and began our mission to Ocracoke. On arrival we unloaded our goods and took a quick tour of the island in one of the only surviving, flooded but running, vehicles on the island.

We were heartbroken for our neighbors. People’s whole lives were being thrown into the streets. We saw vehicles washed up along the roadway, homes destroyed, dead fish littering the roads and tears and desperation everywhere. We were prepared for this kind of thing to happen where we live but didn’t know that God would lead us to Ocracoke to help. We had been called and shown that we had to give our love where it was needed.

From that Monday to Saturday, we rallied volunteers and supplies to help gut people’s homes and remove debris – but most importantly, to pray with and be with the residents of Ocracoke. Our small group of 20 volunteers that arrived on Monday grew to a mighty 120 by Saturday.

All told, we were able to help countless residents and made a lot of life-long friendships. With the support of our friends and communities, like Advance, we have been doing the hard work of rebuilding our town after Hurricane Florence. Now we have the privilege of serving our neighbors in Ocracoke.

God Bless you and thank you for your support and continued prayers, Kristin Cook, Disaster Relief Coordinator, One Harbor Church